Institutions of Higher Learning: A Major Contributor to our Region’s Vitality 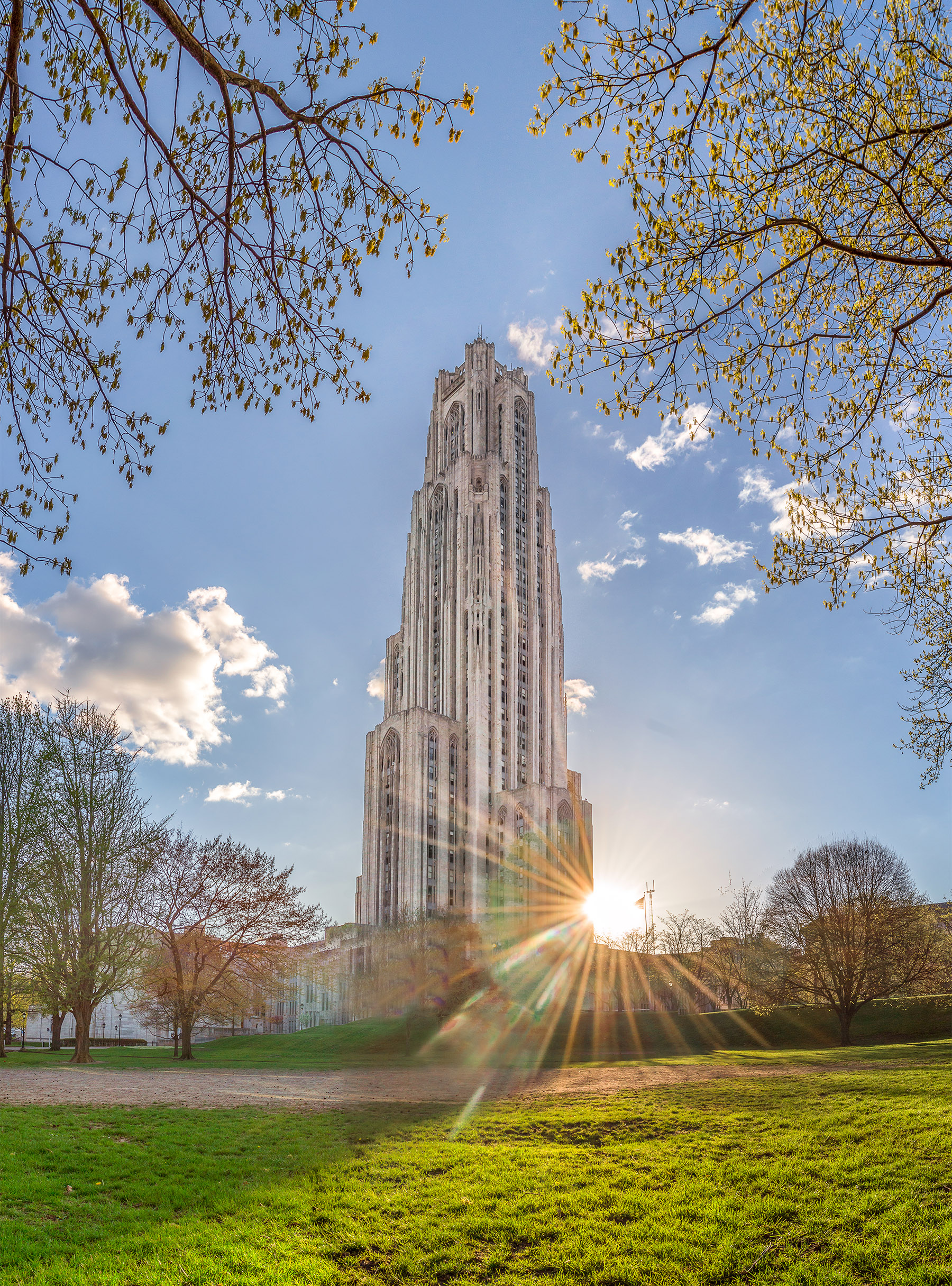 They employ thousands of people. They pay millions of dollars in local and state income taxes. Add to that, factors like student and faculty spending and construction expenditures, and this region’s institutions of higher learning impact the economy to the tune of billions of dollars each year.

Aside from their direct economic impact, Pittsburgh’s world-class universities, prestigious private colleges, and vibrant community colleges enhance the quality of life for all the residents of Pittsburgh and SouthWestern Pennsylvania.

Recognized for the value of its world-class universities and colleges is not new to this region. After all, the collaboration between those institutions, elected officials and the private sector is in large part why Pittsburgh is a shining example of a Rust Belt city that lost its manufacturing base in the 1970s, but came out the other side.

Once on the brink of blight, this region has blossomed into a knowledge-driven hub for manufacturing, technology and healthcare. The seeds for this growth were planted decades ago, when economic distress inspired city leaders to rely on those assets that remained intact – including its well-established educational institutions.

For instance, a comprehensive reorganization in the 1970s of the Western Psychiatric Institute and Clinic and the University of Pittsburgh’s (Pitt) Department of Psychiatry, began a new era of research-based medicine in Pittsburgh — and set the stage for UPMC’s eventual mission of clinical care, research, and teaching.

About the same time, Carnegie Mellon University (CMU) established its Robotics Institute with the goal of making it the best place on the planet to do robotics research – thus giving Pittsburgh’s now burgeoning robotics sector its start. 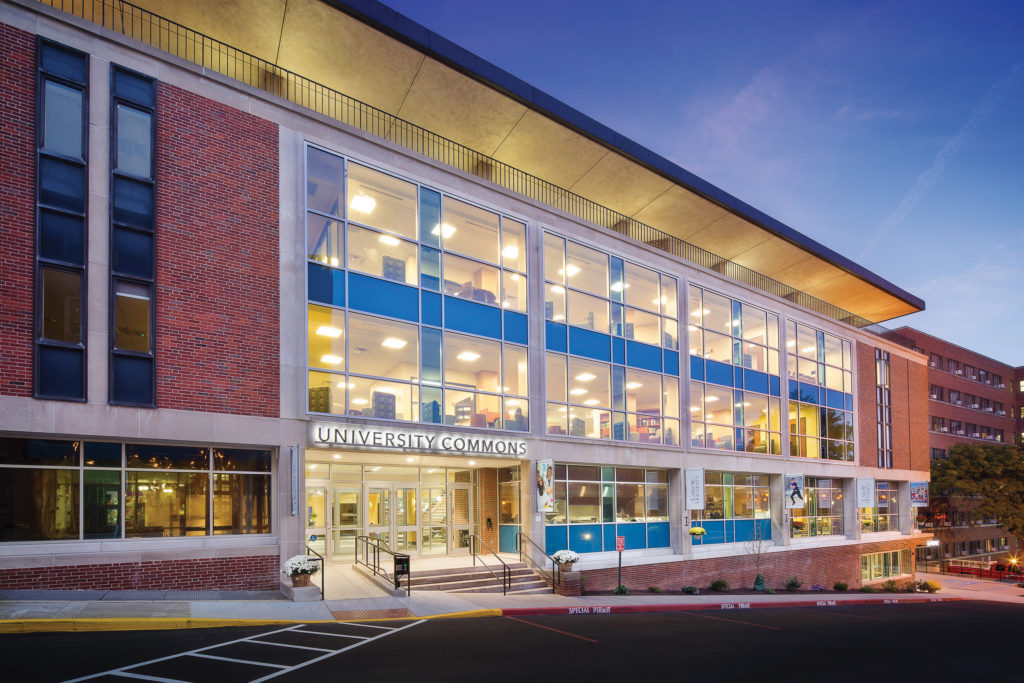 This type of collaboration continues today. Pitt, CMU and many other prestigious colleges and universities remain committed to working with local government and the private sector to drive economic strategy in the region and remain magnets for countless A-list companies investing in technology, life sciences and manufacturing.

In fact, according to a recent Brookings Institute report, “Capturing the Next Economy: Pittsburgh’s Rise as a Global Innovation City,” Pittsburgh is among a handful of cities with the institutions, innovative capacity and core science and technology competencies to compete in the race to become leaders in the world’s next-generation technologies.

The report says this region punches above its weight in academic activity, ranking ninth among the largest 100 cities for the amount of university research and development (R&D), given the size of its economy and is a powerhouse in fields like robotics, gerontology, critical care, artificial intelligence, cell and tissue engineering, neurotrauma, and software.

At the same time, growth in the city’s startup support systems is fueling a new generation of high-value firms. The report points to startups like NoWait that are leveraging the full pipeline of entrepreneurial services to attract investment and grow.

However, despite all of Pittsburgh’s significant assets, the report uncovers untapped opportunity for broad-based economic growth. So – just as they’ve done in the past – leaders in government, philanthropy, and education are rolling up their sleeves and getting to work on seizing those opportunities.   I’ve never seen a report adopted so aggressively into the community.  It points out that we have room to grow to make sure we have a seat at the table in the global economy.

The report called attention to Oakland – Pittsburgh’s established and research-rich neighborhood anchored by the overlapping campuses of Pitt, CMU and UPMC. “Pittsburgh has a naturally occurring innovation district and one of the most powerful innovation ecosystems in the world,” reported Brookings Institution Centennial Scholar Bruce Katz at the study’s release event.  “And now is the chance to realize the full — not just economic — potential but social and sustainable potential. “Everyone wants it; you have it. Everyone’s trying to copy it. You start with it,” he told the crowd.

Based on key recommendations from the Brookings Report, InnovatePGH set out to define, bolster, and connect the “Pittsburgh Innovation District,” centering on Oakland and bridging other world-class innovation assets from neighborhoods like the Strip District, Lawrenceville, East Liberty/Bakery Square, the South Side, Uptown, Downtown, the North Side and beyond.

InnovatePGH’s leadership team pulls together the people who can move the resources and make the decisions that need to be made in order to implement opportunities.

Another way the InnovatePGH initiative is boosting the region is through the Talent Alliance, a workforce development initiative that serves economically disadvantaged populations in neighborhoods around the Forbes and Fifth Avenue corridor. Partner4Work is collaborating with Carlow University, CMU, Chatham University, Pitt, and Community College of Allegheny County (CCAC) to train residents who lack a four-year college degree. Participants will be recruited from Partner4Work’s many community-based organizations.

The four-week program will help participants gain the technical, functional, and interpersonal skills required for success. Graduates are then secured a full-time job at one of the four participating institutions. The program pilot focuses on two job categories – administrative assistants and environmental services technicians.

“It’s about outside of the box thinking,” says Elizabeth Johnston, CCAC’s Executive Director of Public Relations & Marketing. “It’s not only about asking how do you make education work for all, but also how do you get people into family sustaining careers.”

Johnston says CCAC’s role in accelerating this area’s economic development is their ability to work with regional players to forecast what skills will be needed of employees. “We have incredible connections with regional employers and industries. We meet with them and work with them to find out exactly what their needs are. And if we don’t already offer programs that fulfill those needs, then we can create or retool a course or program that is tailor-made.”

According to a recent economic impact study, CCAC supports the equivalent of 34,036 jobs, or one out of every 45 jobs in Southwestern PA. “We aren’t often thought of as one of the big players, like Pitt and CMU,” Johnston says. “But while they come up with major discoveries and inventions, CCAC is the college that educates many of the workers for those discoveries and inventions.”

Like CCAC, Community College of Beaver County also focuses on partnering with employers, most recently Shell Oil Corporation. “CCBC was a leader in serving this new and emerging workforce. We had the courage to create a Process Tech program before Shell even announced they were coming,” recounts CCBC Executive Director of Marketing Leslie Tennant, referring to the school’s Process Technology associate degree program that focuses on STEM education. When Shell’s nearby cracker plant is completed in 2020, it will employ 600 people full-time and currently employs thousands during construction.

Community colleges play a vital role in remediating students in preparation for higher education and workforce training, not to mention they make higher education affordable for many who would not otherwise have the option. “If we weren’t here, there would be a giant void in this community,” Johnston says. “No matter if someone is just starting out or changing career paths, our programs are designed for the worker and for the companies who will employ them.”

Workforce development is also at the forefront at CMU. Take the Advanced Robotics for Manufacturing (ARM) Institute, which recently announced its first round of funding for apprenticeship programs that respond to specific needs of small and medium manufacturers in robotics and automation. By integrating input from community colleges, manufacturers, and roboticists, the program will help students gain fundamental training for future careers in robotics.

“The technologies generated through our selected projects will address critical gaps in industrial robotics, as well as create new opportunities for the American workforce,” said Howie Choset, ARM Chief Scientist. 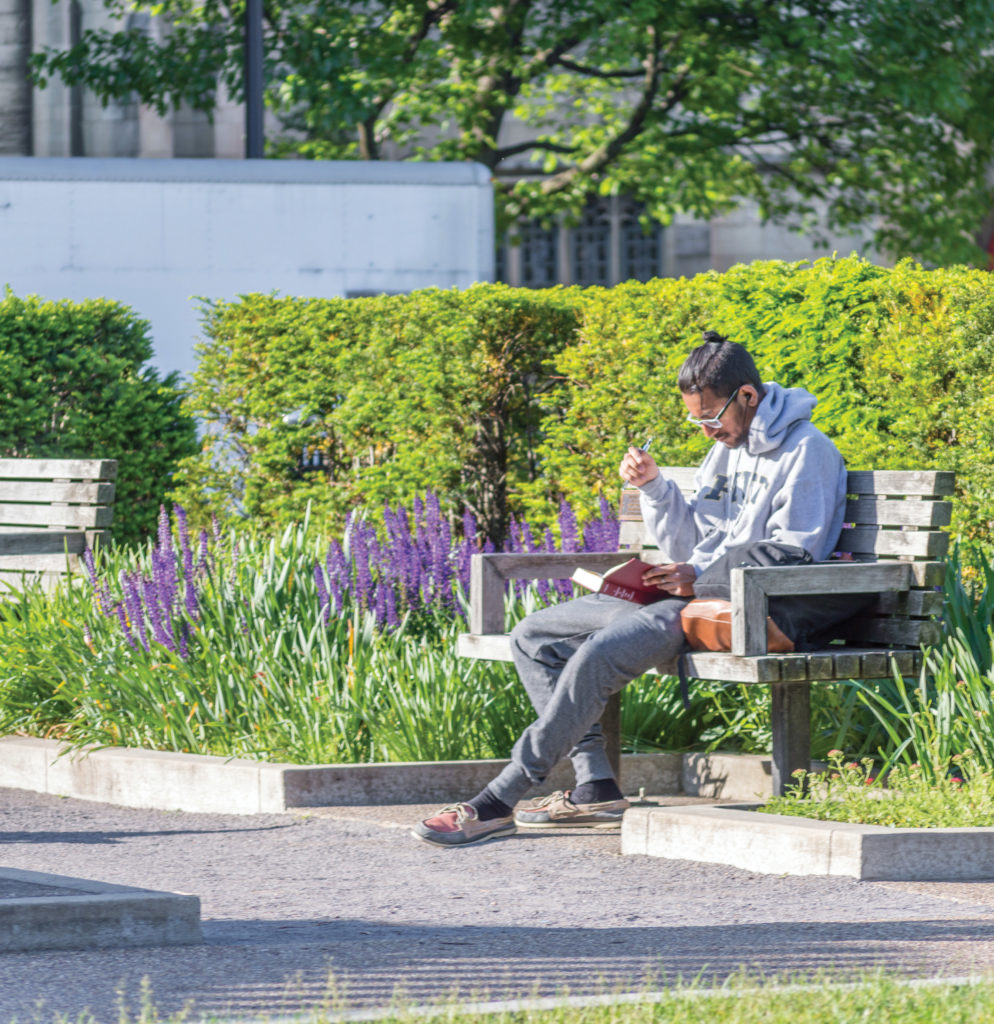 Yet another perk of having a concentration of world-class colleges and universities is the wealth of R&D money that flows into the region. In fact, according to Brookings, the 1.7-square-mile Oakland area comprising Pitt and CMU constitutes one-third of Pennsylvania’s R&D output.

Not only does this abundance of R&D have an economic impact, but also helps the region with a multitude of problems because the community is often the testing ground for all that leading-edge research. Take traffic for example. With seed funding from the Henry Hillman Foundation, CMU established Traffic21 to identify, refine and deploy “intelligent transportation system” technology advancements to the Pittsburgh region’s transportation system. Using an artificial intelligence technology created there, Traffic21 developed adaptive traffic signals, some of which are already easing the city’s traffic woes. Over the next few years, PennDOT expects to have them at 126 intersections, making Pittsburgh not only where this expedient technology was invented, but also where its impact was first appreciated.

“Their work is a great example of how modeling has an immediate impact on our region,” says Dr. Paul Cohen, the founding Dean of Pitt’s new School of Computing and Information. Parenthetically, his praise is also an illustration of the respect and collaboration between the institutions. “We live in a complicated world full of complicated systems – like traffic and public transportation,” Cohen explains. “For humans, it’s very hard for us to wrap our heads around these intricate systems. So, we use artificial intelligence technology to help humans understand and improve the very complicated world in which we live,” he says of the new school’s mission. “Our mission is to make the world a better place through polymathic education and the science of interacting systems. In other words, we focus on solving problems.” And as the home-base for this type of groundbreaking research, Pittsburgh often benefits first.

SouthWestern Pennsylvania also reaps the rewards of research in areas like healthcare and life sciences. The Pittsburgh region is fortunate to have a number of excellent nursing schools, including Pitt, CCAC and CCBC. But not only are these schools meeting the needs of the region for trained health care professionals, but they are also a training ground for the next generation of medical researchers who will continue the quest for cures of major diseases that confront our nation and the world.

Case in point, Pitt recently announced the creation of a hub in Bloomfield – known as 5000 Baum – to nurture and speed the development of new ideas and breakthrough technologies that focus on immunotherapy, cancer treatment and organ transplantation. When complete, the center will combine research, innovation and entrepreneurship in an effort to change the way health care is delivered in such areas as transplantation, cancer and aging and chronic diseases.

With thousands of students from hundreds of countries, the top-notch schools in this region engage people from a wide variety of cultures and backgrounds. There is just a constant flow of people from around the world, whether you’re talking about faculty, students or companies from other countries being hosted on campuses. As markets continue to expand globally and companies look to diversify their workforce, the whole region benefits from this diversity. From a company standpoint, whether you’re talking about employing students, research or political work, there is a global footprint here.

The region’s academic institutions’ openness to different cultures – not just on a global scale, but also locally – play a key role in creating a vibrant community. Whether its countless examples of student and faculty volunteerism or a variety of programs aimed at engaging socio-economically disadvantaged neighborhoods, colleges and universities strengthen the region by drawing and connecting a diverse population.

Bottom line, one of Pittsburgh’s most notable assets that set it apart from any other American city is its range of options for higher education. From tax dollars and workforce development to leading-edge research and community engagement, higher education is a community-wide advantage. We can use our intellectual breadth to help drive economic strategy, but we can also use our employment power and our buying power to make sure that we have a Pittsburgh that best serves everyone in the region. mg 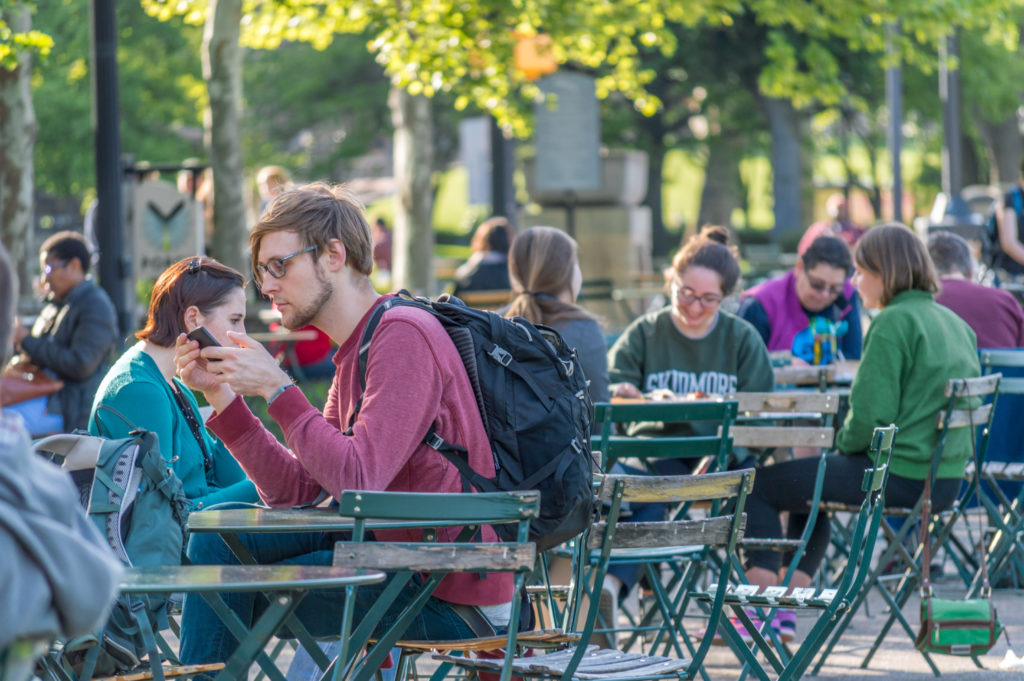