Pittsburgh’s commitment to education and its high quality schools is an enormous draw for families moving to the area. Now, Pittsburgh is leading the way in a new initiative called Remake Learning, a concept envisaged by Gregg Behr, president of the Grable Foundation, a nonprofit family foundation whose focus is the well-being of children and youth in the region, particularly at-risk youth.

Remake Learning does exactly that— the professional network of educators and innovators has been remaking, re-envisioning, restructuring, rethinking and basically, turning education in Western Pennsylvania and beyond on its noggin.

The objectives of Remake Learning are multifold, but primarily, said Linda Topoleski, who sits on the Remake Learning Council and is the VP of Workforce Operations and Programs with Allegheny Conference on Community Development, they are to prepare today’s children for tomorrow’s world with elevated skills and abilities, to attract employers to the region, and to retain a workforce.

The key to Remake Learning’s success can be summarized in one word: collaboration. Through a series of about 250 partnerships with schools, corporations, museums, libraries, nonprofits, philanthropists, and more, thousands of at-risk youth in the area are now getting an opportunity to participate in learning activities, either at their own schools or off-site.

“Simply put, Remake Learning is ultimately about providing support in all of the places where kids learn, to help them develop skills, the mindset and the discipline to forge a brilliant future, given the remarkable unknowns about the future,” said Behr.

The idea was borne out of communication with educators, many of whom were reporting that they were not relating to students as much as they had been even a decade earlier. This led Behr to ask himself, “Did something seismic happen in the lives of kids that they are so differently wired that adults are feeling some sort of disconnect?”

Behr passed that question along to educators as well as those involved in arts and technology and began exploring whether or not today’s kids were being supported in the right ways.

And they discovered something that had not yet been fully recognized: There was a clear desire between businesses and educators to work closely together. “Businesses were saying that we don’t have the pipeline of talent and skills that we need; educators were saying, work with us to tell us what we need, and we can make changes,” said Topoleski.

The question(s) then became, “How do we as a region strategize around prepping our young people for an increasingly uncertain future, and how we do that in collaboration rather than in competition?  And how do we work across sectors and across organizations?” added Sunanna Chand, learning innovative strategist for Remake Learning.

By bringing these folks to the same table, trying to find some common solutions, a network gradually evolved. “Over the years, this formal structure has come together to support what was a humble and organic beginning,” said Behr.

And there is no cap to the limit on how many organizations or companies can get involved or in the ways in which they can contribute.

“All the organizations, in different ways, are employing what amounts to modern learning pedagogies,” he said.

One idea is the concept of teacher academies, said Topoleski, in which teachers have “internships” with businesses “…so that they can get a firsthand look into the workplace and can translate that into the classroom.”  Another, in the prototype phase, is a digital career awareness hub, which Topoleski describes as a technology and jobs platform that would enable users to explore career pathways based on actual job data.

Consistent with the model of collaboration, Remake Learning is also focused on integrating families as partners in their kids’ education.

“We have to recognize that everyone in a kid’s life is central to his or her own learning. One of the hardest things about any public policy is how best to support families, parents and caregivers,” said Behr. “The more we can do to expose, introduce and excite parents into learning labs and technology and pedagogies and help understand how they use those things, the better we can support kids.”

Perhaps children haven’t changed at their very core, but the world in which they live looks a lot different than the world in which their parents lived. The advent of technology and computers has forever altered the landscape and the influence on society, on education, and on the way children learn, process, and consume knowledge.

Rather than trying to turn back the clock to employ dated educational methods for this unprecedented generation of tech and digital savvy kids, the idea is to help them make sense and learn from the world that they inherited from the previous generation of learners.

STEM—Science, Technology, Engineering, and Math—is at the core of the majority of programs and initiatives that comprise Remake Learning. In fact, Chand pointed out, the MAKESHOP® at the Children’s Museum of Pittsburgh is one of the earliest examples of Remake Learning in action.

A more recent innovation is a mobile Fab Lab, a partnership between Chevron and Intermediate Unit 1 and the Fab Foundation, which will give students in three counties access to design and fabrication equipment; a permanent lab has been installed in Grindstone, PA in Fayette County.

“It’s been terrific. The mobile lab is booked, with a waiting list, and then the lab itself is used throughout the day for school itself; other classes come to use it, and it is open to the public for an hour on weekends,” said Mary Murrin, who is the social investment team lead with Chevron, a member of the Remake Learning network. Murrin is also co-chair of Remake Learning Council, a conglomeration of leaders from various sectors to support teaching and mentoring.

One major goal with these STEM-related programs is to not only build a workforce but an accompanying awareness of how and where to find jobs in the region. And those jobs do not necessarily mean that the only road to success is by attending a four-year college.

In actuality, said Murrin, there are multiple pathways that lead to a host of well-paying jobs, in which STEM-related problem solving would be highly beneficial. “The reason we stress other pathways is there is so much focus culturally on going to college. It is very important, but there are great opportunities that are sometimes missed by people who don’t have that opportunity, who think there is not a way to make a family-sustaining wage,” she said.

A Convention of Unconventional Learning Opportunities

Remake Learning Days has become an annual event in which children of all ages, and all throughout the region, can participate. Each May, a considerable selection of organizations, including school districts, libraries and museums, offers hands-on, personalized learning opportunities for youth. In 2017, approximately 350 events were held over the course of one week across southwestern PA and parts of West Virginia to engage children in enhanced learning opportunities as well as to show parents how kids were responding to these new approaches.

For example, the Carnegie Library of Pittsburgh, East Liberty branch, offered a program entitled “STEM Imagination Builders,” geared toward elementary-aged children; Trinity Area High School was the site of a Farm in a Box program, designed to expose students to the science of hydroponic agriculture; Arsenal School hosted an “Out in the Garden” program for kids to learn how to plant food; and the Challenger Learning Center at Wheeling Jesuit University hosted an event called Target Moon.

While STEM is a major focus of many of these programs, Behr said that Remake Learning focuses on the integration between left and right brain thinking. Allegheny Intermediate Unit has been at the forefront in supporting STEAM, with an emphasis on the “A” for arts.

In fact, at this year’s Remake Learning Days, more than 80 STEAM events took place: the Alumni Theater Company conducted a Hip Hop Dance Class; the Children’s Museum offered Plein Air (open air) painting; and a program called Under the Tent and Around the World, hosted by City of Asylum and Propel Schools, gave families opportunities to listen to music and authors as well as sample foods from other cultures.

Although every child in the region can benefit, many of these learning opportunities are geared toward at risk-youth, or any young person whose circumstances might prevent them from ascending to their highest capabilities. For example, said Chand, girls are one primary target group, because studies have shown that they are still highly underrepresented in STEM fields.

Murrin said that it is crucial to incorporate these principles in rural areas. “They may only be 70 miles outside Pittsburgh but feel much further away and don’t have the access to these programs that take place in Allegheny County,” she said.

One success story documenting the impact of modern learning Behr points to is at the Elizabeth-Forward School District in southeastern Allegheny County. Located in a low-income, rural area that is not well resourced, students there do not have some of the same choices for the future as their counterparts who live in higher-income neighborhoods. Thanks to some of the Remake Learning partnerships, however, the high school has redesigned their space to “…look like the tech center at CMU, and redesigned the library to look like the Chicago Public Library,” said Behr. All that, including a maker space in the middle school, has resulted in an increase in math and reading scores, a major reduction in dropout rates, and an increase in summer learning, he reported.

And not only that, but Elizabeth-Forward is partnering with other school districts to share their experiences in a pay-it-forward kind of way. “It’s a remarkable example of school districts thinking well beyond the boundaries of their own jurisdiction,” said Behr. 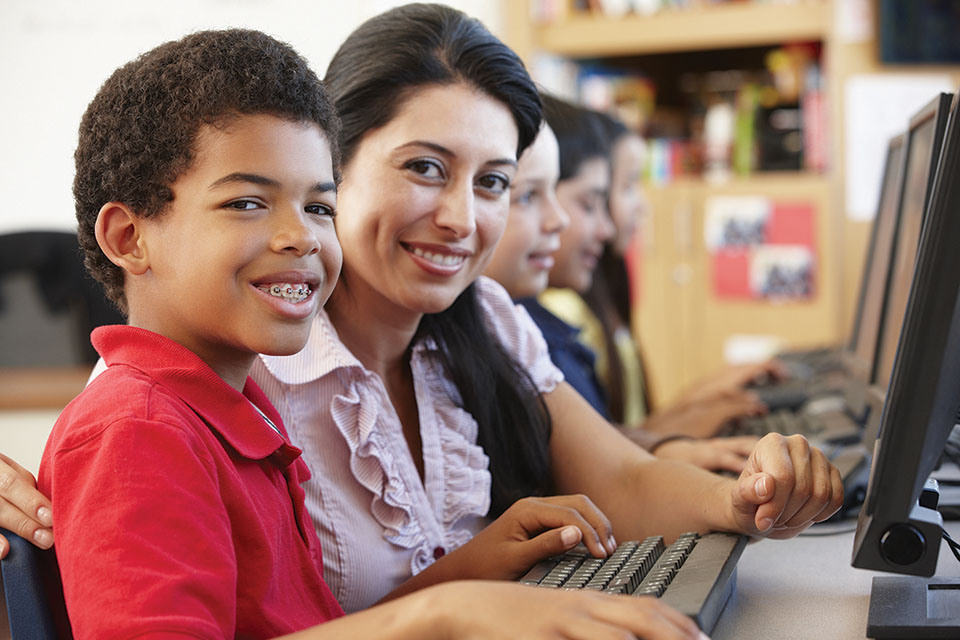 Because of the spirit of collaboration in Pittsburgh, the city serves as the ideal spot for this unique educational model. “Innovation is not new to Pittsburgh; Pittsburgh has constantly reinvented itself; it is a hotbed for innovative and creative people,” said Chand. She also pointed to the legacy of Fred Rogers as providing the foundation for deep and meaningful early childhood learning experiences in Pittsburgh.

Murrin agreed. “You get a very good sense of just how remarkable Pittsburgh is, and its innovation and creativity and forward thinking about education; that is largely because of the rich history we have of universities and philanthropists that together give us this state of mind that is really unique nationally.”

“It has really coalesced some of the brightest minds and best resources in this region to really illuminate how best to create learning environments for our kids that relate to the future,” added Topoleski.

One measure of the impact that Remake Learning has made thus far is the number of visitors, representing philanthropic organizations, educators, foundations, and the like, who come to Pittsburgh with the express purpose of studying Remake Learning and how it operates.

In fact, Remake Learning Days garnered international attention, having been recognized in a white paper published by the World Economic Forum as an example of an effective educational model.

While learning in the classroom has been, and most likely always will be, a traditional mainstay of primary school education, Behr envisions a day when the concepts behind Remake Learning are so ingrained in the educational culture that the need for the formal organization becomes obsolete.

“It is prompting all of us to think in modern ways about learning; learning happens anytime, anywhere, at any pace, and we have to think really differently about how we support kids and their future, not about the future we imagine for them,” said Behr.

Numerous additional examples of ideas, resources, programs and outcomes can be found on the Remake Learning Playbook, a digital project created by the Sprout Fund, and can be accessed on Remake Learning’s website, www.remakelearning.org. mg